Showing posts from 2015
Show All

The following is from a website hosted by David Griffith. See link


David John Munrow (Aug. 12 1942 – May 15 1976) was born in Birmingham and attended King Edward VI School, Birmingham (amongst his contemporaries was tv ‘birder ‘and comedian Bill Oddie). He played bassoon, recorder and piano with some distinction, and sang as a chorister in Birmingham Cathedral, and in the University Orchestra which rehearsed just across the road from the school – although a musical career was not uppermost in his mind. His father, Albert Munrow, was a Birmingham University lecturer on physical education and there exists a sports centre in his name. Munrow had a strong association with Birmingham and the surrounding area.
In August 1960 Munrow went to Lima, Peru, as a student teacher under the British Council’s Voluntary Service Overseas scheme. He helped the pupils at Markham College – a private boys school – prepare for the Common Entrance exam. Whilst there, he avidly col…
Post a comment
Read more

Instruments of the Middles Ages and Renaissance


David Munrow only wrote one book, and it was essentially an accompaniment to two records which acted as musical "illustrations" of specific Early Instruments such as the crumhorn, hurdy-gurdy, sackbut,
lute, et cetera.


He produced something similar  called the Mediaeval Sound (a single record) which involved a vocal introduction on each instrument on side one. Munrow believed that discussing such a subject not only required written material, but also musical examples...otherwise it was all rather pointless. 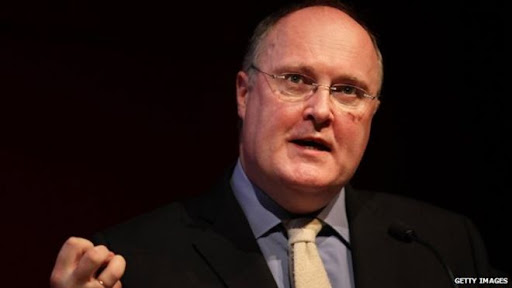 5 April 2015 From the section Entertainment & Arts Image caption Alan Davey took over as controller of BBC Radio 3 in January
The new boss of BBC Radio 3 says he plans to revive the classic 1970s series Pied Piper, which introduced young listeners to the world of music. Presented by David Munrow, the fondly-remembered show covered everything from medieval music to prog rock.
Speaking to the Sunday Times, Radio 3 controller Alan Davey said he was keen to commission a modern version.
"Young people are ­growing up with an open mind about various kinds of quite ­complex music," he said.
"It's not classical music, but it's not pop music, either. The step into classical music would be quite easy for them if they were to encounter it in the right way."
Davey took over from Roger Wright in January, and has been listening to archive tapes of Pied Piper, which ran for 655 episodes between 1971 and 1976.
Although the programme wa…
Post a comment
Read more

David John Munrow, in his brief career, was one of the most exciting and influential leaders of the British early music movement. After he completed his school education, he taught for a year in South America. He returned to England to attend Pembroke College, Cambridge, where he read for a degree in English from 1961 to 1964. He was an avid and talented flute player and while at Cambridge founded an organization to play early music. After he graduated, he studied 17th century music at Birmingham University. It was his exposure to South American indigenous music, with its strong use of wooden instruments of the flute family, that stimulated his interest in such instruments, including the recorder. At that time, interest in England in early music was growing. Munrow found himself in great demand as a recorder player. In 1967, he founded the Early Music Consort of London, with counter tenor James Bowman, violist Oliver Brookes, lutenist James Tyler, and harpsichordist Christopher Hogwo…
Post a comment
Read more

Collection of strikers and beaters belonging to David Munrow

David Munrow (of the Early Music Consort) and Folk Music

[Translate]
The following is from the excellent blog Semibrevity. However, the link here takes one to another musician other than David Munrow... http://www.semibrevity.com/2014/09/account-of-the-funeral-of-magician-frans-bruggen-in-the-old-church-in-amsterdam/


Guest blogger: Edward Breen (London-based musicologist, writer and lecturer whose 2014 PhD dissertation was entitled The Performance Practice of David Munrow and the Early Music Consort of London. See here for more of his work.) David Munrow (1942-1976) was one of the most widely-known early music ‘personalities’ of the 1960s and 70s. He was a woodwind specialist and director of the Early Music Consort of London and also a prolific broadcaster. As a regular BBC presenter many knew him through his long-running radio series Pied Piper which was aimed at a younger audience but enjoyed by listeners of all ages. Over the course of five years and 655 programmes he discussed a huge range of music themed in four weekly installments that …
Post a comment
Read more 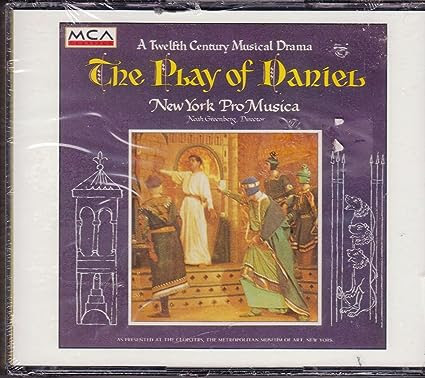 David Munrow had planned to do the classic Play of Daniel..but it was not be.


From Wikipedia, the free encyclopedia Jump to: navigation, search The Play of Daniel, or Ludus Danielis, is either of two medieval Latinliturgical dramas based on the biblical Book of Daniel, one of which is accompanied by monophonic music. Two medieval plays of Daniel survive. The first is one of the plays in the Fleury Playbook, a 13th-century manuscript containing ten liturgical dramas; the text is by Hilarius, and no music accompanies it. The play itself dates from c. 1140. The second is a 13th-century drama with monophonic music, written by students at the school of Beauvais Cathedral, located in northern France. Both plays were completed about 1227 to 1234.[1] A large portion of the text is poetic rather than strictly liturgical in origin; it closely follows the narrative of the biblical story of Daniel at the court of Belshazzar.[2] The latter play was revived in the 1950s by Noah Greenberg, …
Post a comment
Read more 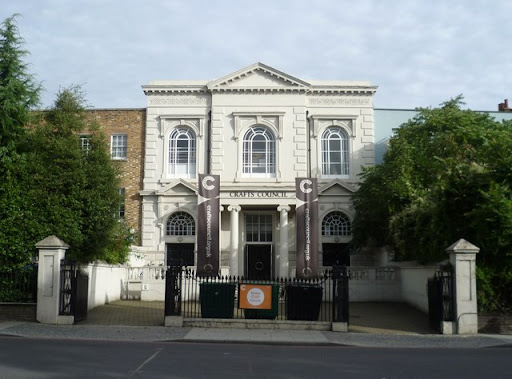 Back in 1986 I attended the Open Exhibition on "Musical Instruments" featuring the David Munrow Collection. Ofcourse, he had a very large collection of instruments, and those displayed were catalogued in a special brochure for the occasion. Unfortunately, I do not have a copy of it. Among other things including two, or more rare photos of Munrow there was a bar area where Ancestral Voices was being played on a television. Ancestral Voices was his last recorded public appearance as a tv presenter discussing old musical instruments. Not long after its completion Munrow took his own life. RS

Ritchie Blackmore, and the Munrow Connection 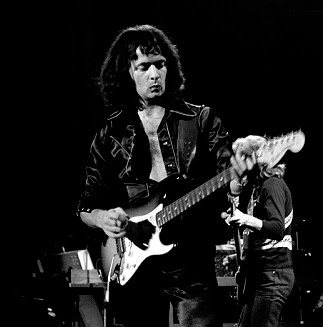 
Legendary guitarist Ritchie Blackmore co-founded hard rock bands Deep Purple and Rainbow before making a dramatic switch in 1997 with the creation of Blackmore?s Night. Formed with his wife Candice Night, Blackmore?s Night is a Renaissance-influenced pop rock band. Fender News recently caught up with the esteemed guitarist ? Rolling Stone lists him as one of its ?100 greatest guitarists of all time? ? for the following Q&A?

FN: As a founding member of Deep Purple and Rainbow, it?s very interesting that you have also become so successful in a totally different genre. When did you first feel an inclination towards Renaissance-inspired music?
RB: I felt an inclination towards Renaissance inspired music ever since I heard the song ?Greensleeves? when I was 11 years old. And then again in 1972 when I heard David Munrow and the Early Music Consort of London. I would always listen to this music at home or in the hotels on the road. I was fascinated by the sound of woodwind …
Post a comment
Read more 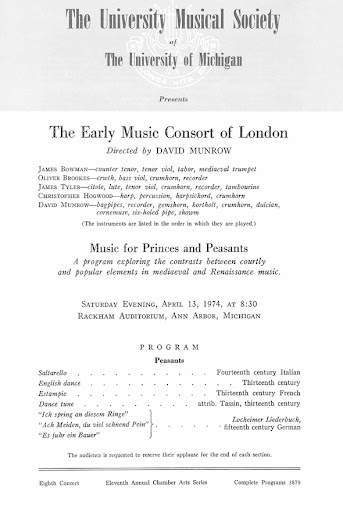 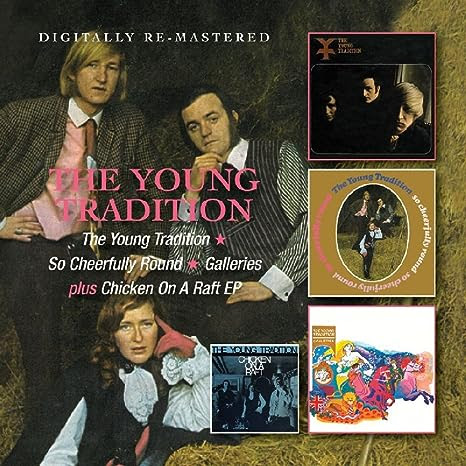 
The Young Tradition were a British folk group of the 1960s, formed by Peter Bellamy, Royston Wood and Heather Wood. They recorded three albums of mainly traditional British folk music, sung in arrangements for their three unaccompanied voices.

Contents [hide]  1Biography2Discography3References4External links
Biography[edit] The Young Tradition was formed on 18 April 1965 by Peter Bellamy (8 September 1944 – 19 September 1991), Royston Wood (born 1935 died 8 April 1990) and Heather Wood (born Arielle Heather Wood, 31 March 1945, Attercliffe, Sheffield, Yorkshire) (who was unrelated to Royston Wood). Most of their repertoire was traditional British folk music, sung without instrumental accompaniment, and was drawn especially from the music of the Copper Family from Sussex, who had a strong oral musical tradition. They augmented the pure folk music with some composed songs which were strongly r…
Post a comment
Read more

The Genesis of the Early Music Shop 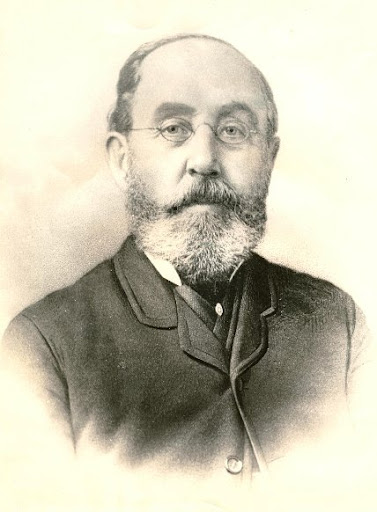 The Early Music Shop was run by Richard Wood, and the term "Early Music" in the title was originally suggested by David Munrow. It has played a vital, and pioneering role in the development of Early Music. Munrow himself was closely connected with it, especially in the recreation of "new" arcane instruments for his work.


The Old History and the Legacy
Joe Wood Joe Wood, organist and choirmaster of St. Paul's in Huddersfield, started his business in 1850 with the name of 'J Wood Music' selling pianos, and later sheet music.  By 1861 he was manufacturing pianos and his business was later named ‘J Wood’s Pianoforte & Harmonium Depot’. Around 1874, Joe took on his apprentice, and brother-in-law, Joshua Marshall as his partner and the shops were re-named ‘Wood & Marshall’.
In 1877 Wood extended his empire to Bradford, sending his son William to take over a music business already established there (d'Este's). In 1882 the shop in Huddersfie…
Post a comment
Read more