The following may of interest! 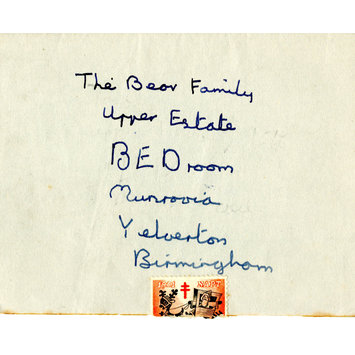 One of a series of seven letters, handwritten by David Munrow to his beloved teddy bears and toys while he was on holiday in Cornwall as a young boy in the 1950s. In these affectionate and newsy letters to bears ‘Humph, Ginge and Eddy,’ David paints an exciting picture of his holiday activities for the soft toys left behind in his Birmingham bedroom: ‘We have caught eight fish…we eat them for breakfast’; ‘I really ought to have written before but we have been so busy painting the boat’; ‘The other day I tried to reach a stick in the water and Plosh! In I went with all my clothes on’; ‘I hope you arn’t [sic] too lonely at home but we've only got another week down here’.
David Munrow’s intelligence, imagination and wit shine through. He adds a post script to many of the letters from a toy named ‘Poo’, which he writes in a different hand and with deliberately bad spelling: ‘I am rather lonely here sumtimes but its nise when the sun chine’; ‘I hop yoo are orl wel cos we are. Lots of Luv Poo’
Accompanying the letters are other objects from David’s childhood: a handwritten exercise book of plays and the three teddy bears who are not only the main addressees of the letters but also star as some of the principal ‘actors’ in David’s plays. This collection of objects provides a wonderful insight into the early interests and imagination of a child who went on to become a well-known musician and broadcaster.


Also, the following may be of interest