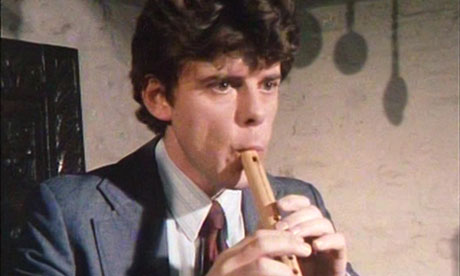 'A ceaselessly energetic explorer of early music' … David Munrow. Photograph: Granada TV
What's happened to early music? Now we've got conductors such as Nikolaus Harnoncourt and John Eliot Gardiner conducting the Berlin and Vienna philharmonics, it seems like these radical musicians, who shook up how we hear and how we play music from Monterverdi to Mozart, Bach to Beethoven, have now become part of the establishment, as if the revolution has been won: it's no longer about "early music" as a separate category opposed to the mainstream, but about an essential, questioning approach to music we thought we knew.


But hold on a minute: where has the radicalism gone, the spirit of adventure and discovery that catalysed musicians' imaginations and scandalised audiences and scholars in the 60s and 70s? On Saturday, as part of the Bath festival, there's a celebration of the life and legacy of one of the true pioneers of early music: David Munrow, who would have been 70 this year, had he not tragically taken his own life at the age of 33 in 1976. His career was one of scarcely believable energy and productivity: few musicians have ever played as many instruments as Munrow, from bassoon to shawm to crumhorn to recorder; he brought medieval and renaissance music to a wider audience in books, on television, and on radio; his Radio 3 show, Pied Piper, ran for five years, in which time he made an astonishing 655 editions, and covered music from monody to prog rock..


Munrow's music-making is simultaneously radical and urbane, as you can see and hear from his work on YouTube, or if you listen to any of the more than 50 albums he also managed to make. Born in Birmingham, Munrow's essential early-music inspiration came when he was at studying English at Cambridge, and discovered a crumhorn hanging on the wall of a friend's room. But Munrow's idea wasn't to create a dusty academic archaeology of early music, but rather to connect whatever he was playing to the world around him. The early woodwind instruments whose repertoires he revealed to the modern world sounded as modern, as new, and as strange, as anything contemporary composers were up to at the time, and connected with the living traditions and instruments of Peruvian folk music that he had studied in Lima when he was still a teenager.


There's more to the Munrow legacy: music for film scores for movies by Ken Russell and John Boorman, his time working as a musician for the Royal Shakespeare Company; oh, and the fact that his recording, with the Early Music Consort that he founded with Christopher Hogwood, of Holborne's Fairie Round, was chosen to be put on the golden disc that accompanied the Voyager spacecraft in 1977 as one of the crucial sounds that humanity has ever made. But more than any single recording or performance – but there are few better or more fun ways to experience centuries of musical history than in the company of Munrow and his musicians, performances whose sheer quality and passionate musicianship gives the lie to the idea that the pioneering years of the early music movement were all about out-of-tune instruments, the aural equivalent of a historically accurate hair-shirt – it's his example as populariser, proselytiser, and ceaselessly energetic explorer that makes him one of the greats of 20th century music. Music – early or late – needs more inspirational Munrows