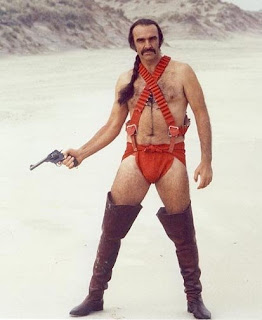 If you have never seen the magnificent 1974 sci-fi/fantasy classic "Zardoz", for God's sake drop whatever you're doing and get thee to the nearest video store (or computer, if your a Netflix-er) and rent this shit! John Boorman (who also directed the classics "Excalibur" and "Deliverance") really hit a home run here, bringing us not only a giant floating head, post-apocalyptic barbarians, and a telepathic secret society living on a creepy commune, but the image of Sean Connery in a diaper (see example above). I'm trying to think of a sci-fi movie from the 70's that I dig more than "Zardoz", but so far I've got nothing. David Munrow's psychedelic soundtrack is a perfect fit for this hippie-dippy tale of futuristic intrigue, and although there is no official release of this score, I found a sweet bootleg on the good ol' internet, recorded straight from the film with dialogue and sound effects intact. Some of the tracks are just short, 20 second interludes of incidental music, but the longer ones, with baffling dialogue fading in and out over analog synth and other assorted weirdness, are true keepers, as good an example as any of why the 1970's were the best decade EVER for science fiction films.

Zardoz The Floating Stone Head sez: "THE GUN IS GOOD! THE PENIS IS EVIL! THE PENIS SHOOTS SEEDS, WHICH BRING NEW LIFE AND POISON THE EARTH WITH THE PLAGUE OF MAN! GO FORTH, AND KILL!" (actual quote from the film) 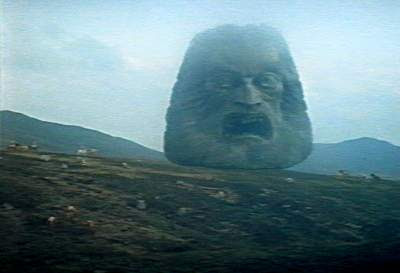 Below: Trailer for "Zardoz". If you can believe it, the movie is actually BETTER than the preview suggests.


PS: How awesome is the expression on Sean Connery's face when he gets sucked into that prism?
Posted by Shelby Cobras at 12:44 PM